We decided to test this popular adult board game to see if it can spice up your date nights.

Monogamy is an adult board game, meant to be played by a couple. While it has been designed heterosexuals in mind, homosexual couples can enjoy it too in our opinion. For example, each action card has a ‘his or hers’ action, however often either option can be used for the man or woman anyway. The scope of the game is quite broad, so it doesn’t really matter what sexual orientation you are. That being said, the game (and wording of it) has been designed in a way that suggests heterosexual use, so if that bothers you – look elsewhere.

Inside the box you get a well made game board that folds in half. There are 400 different ideas on all of the cards (with three different intensity levels). Again the cards are well made and look nice. However the text on the cards themselves is quite small so for those of you who are short sighted like me, you will need to keep your glasses nearby. The dice also feels quite nice. The playing pieces are made of plastic and you add coloured plastic disks to them as the game progresses. The plastic that these playing pieces are made out of seems a bit light and tacky. I’m really nitpicking with that comment though. Overall, the game looks and feels good. The quality is fairly high.

The rules are simple and easy to follow. However we had to keep the rule booklet to hand on our first few games. For example when you land on a ‘kiss’ square, you have to kiss for a certain amount of time, in certain places, depending in what stage of the game you are. This also goes for massage squares and several others.

While Monogamy’s layout and name make one think of the classic game ‘Monopoly’, this board game is totally different. Here are some of the ways it is different.

1 -Monogamy has been simplified. You don’t buy any property, deal with rentals, tax or fines and you don’t go to prison (as happens in Monopoly). There is also no pseudo-currency and the rules are simpler. In short, Monogamy is far simpler to play and doesn’t take as much time as the classic family game Monopoly.

2 – Monogamy has completely different and adult action squares. If you land on one of the many action squares of Monogamy you could be asked to remove a piece of clothing or kiss for example. This is the same for the action cards, all are adult in nature.

3 – Monogamy has a circular design and the imagery, colours and text look completely different.

4 – In Monogamy, there are three different stages of play; intimate, passionate and steamy. There are special fantasy cards that you also pick up every time you pass the starting ‘Go’ square.

5 – The playing pieces of Monogamy are very simple and don’t resemble anything (as they do in Monopoly).

In short… Monogamy is nothing like the classic game Monopoly, despite the similarity in name.

Monogamy’s main rival is Nookii, which we recently reviewed. Nookii is a faster game to play and is slightly less compregensive than Monogamy. Monogamy has more aspects to it, such as drinking eating and choosing the fantasy cards. Monogamy therefore usually takes longer to play. Nookii is great for faster games and it is more to the point. You can read the review of Nookii here.

Board setup and basic overview of rules 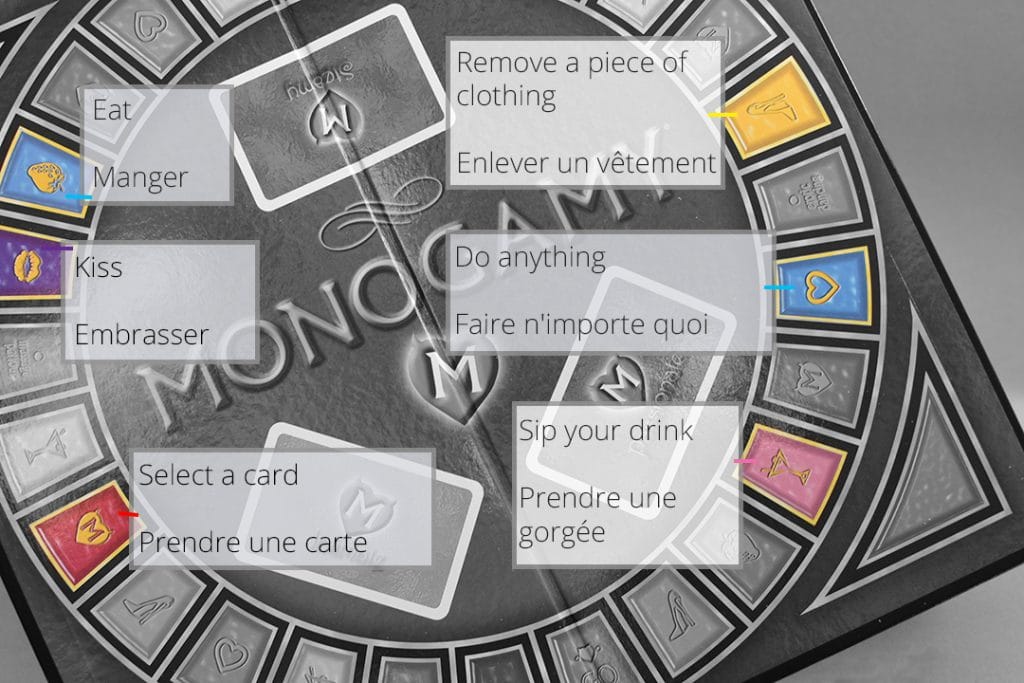 On the kissing square, you can kiss your partner only on the areas stated in the rules (this area varies depending on what stage of the game you are in). On the strip square, you remove one item of clothing. On the card squares, you select a card from the deck of your current level. With the heart squares, you can do any action you like. The other repeated squares are self explanatory.

Every time you pass ‘Go’, you are meant to progress a level in the game. You spend two rounds in each level (these are represented by coloured disks you place on your playing piece). You also select a ‘Fantasy Card’ when you pass Go. You should only ever keep two fantasy cards at a time, so you have to place back ideas that you don’t want. Whoever reaches the end of the game first can then choose one of their fantasy cards to come true.

We have played the game several times and have enjoyed it on every occasion. Usually we play from the starting level ‘intimate’ which contains quite tame actions. However we once played it from the highest level ‘Steamy’ because we wanted to move on to sex more quickly. In both cases, Monogamy works great. They even suggest in the rules several different ways of playing the game, making it last a longer or shorter amount of time.

There are several things you need to play a proper game with Monogamy:

So what if you don’t want to eat or drink? This is where things get interesting for Monogamy. You just have to choose a different action for those squares instead, I suggest just making it a card square (where you pick up a card and perform an action).

What we loved about Monogamy

It really is a great way to spend a date night. Just using this game can suffice for the whole night.

Sometimes the game’s steamy cards will give you actions that you would prefer to do at a later date. Also the game always ends on a fantasy card, which is meant to be performed at a later date (or right after the date. Therefore the spice this game gives can last well beyond the time you pack up the board game.

So long as you have a monogamous relationship, there is something for everybody. No matter how kinky you are, this board game will have something for you. Plus if some suggestions aren’t naughty enough, it’s very easy to adapt them.

There are LOADS of ideas. When buying games, we are used to having only a few ideas, actions and suggestions. With Monogamy there are hundreds of options, meaning it can be played hundreds of times without you running out of new things to do.

We really enjoyed that drinking is part of the game. Champagne is a great way to do this, although you could use anything. The goal is to take a sip each time, so it loosens you up without getting you drunk.

Personally, we loved the suggestions on the ‘Steamy’ cards.

What we disliked about the Monogamy Board Game

The first thing we noticed with Monogamy is that the ‘strip’ squares quickly come to mean nothing. If you are only wearing a few items of clothing, you will quickly lose them during the first few rounds of the board. So after you are nude, you either have to do nothing on the strip squares or choose to do something else instead.

The third problem we have with Monogamy is the ‘Fantasy’ cards. If you dislike role play, not many of these cards will appeal to you. Some of the suggestions are usable but most of them a bit ridiculous. To be fair to the game, these cards aren’t a massive feature in it. However one of you still has to choose one of the fantasy cards for ‘winning’ the game. My favourite one so far involved Eve becoming my ‘sex slave’ for the day. However there are a lot of cards we don’t find sexy or tempting at all.

The fourth problem we have is minor. We found the ‘intimate’ cards and some of the actions that go with that level a bit too tame… and sometimes lame. Kissing each other on the cheek is weird for instance. This level of the game is sometimes a little too innocent. For example take this question from the intimate deck “What do you believe, is your partner’s most treasured posession? Are you right?”. It’s nice… but sometimes we roll our eyes and want things to get steamier. One good way around this is to skip the ‘intimate cards’ and go straight for the second level.

Sex after playing this game is amazing. All of the possibilities are floating around in our heads afterwards and we will have been teased throughout the entire game. We are sometimes talking dirty about the fantasy card one of us has chosen, or sometimes even performing the fantasy afterwards.

Sometimes we don’t manage to finish the game before we have sex or make each other climax. Eve usually climaxes at least twice before the game is over. Especially if I am instructed to give her oral sex for several minutes during the game.

Once we played the game for a very long time and didn’t actually have sex afterwards because we’d done so much during the game already. I hadn’t climaxed at that point, so we used a sex toy on me to finish the evening. It’s a different kind of ending but I was happy nevertheless!

Examples of the action cards

Whenever I am shopping for board games, I want to know what some of the action cards are like. We have you covered! In Monogamy, each action card has ‘his’ or ‘hers’ actions.

Monogamy is a great way to spice up your sex life. We are happy to recommend it to anyone. Despite the fact that the game has many actions we wouldn’t personally enjoy doing, we can’t deny that Monogamy has something for everyone.

Many of you may be wondering how Monogamy compares to its main rival Nookii. Monogamy is better for a full date night, because it involves drinking, eating, massaging etc and in general takes longer to get through. That means the excitement and buildup is longer too. Nookii on the other hand is a faster game and is simpler to play. We personally prefer Nookii because it is easier to play it spontaneously (Monogamy requires a little more preparation). Both are great board games though. We recommend you buy both!

Looking for something different? Check out our full review of Nookii here.

Please note, we don’t update the price listed here. This was the price at the time we wrote this article.

This page contains affiliation links and if you use them we will get a small commission when you buy Monogamy. Affiliation is the only way our little website makes money so we really appreciate your support by using our links! 🙂

Hi, I'm a sex blogger from the UK and live in France. My sex toy reviews and other articles are created to inspire and inform you. Hopefully I succeed :)

Any cookies that may not be particularly necessary for the website to function and is used specifically to collect user personal data via analytics, ads, other embedded contents are termed as non-necessary cookies. It is mandatory to procure user consent prior to running these cookies on your website.